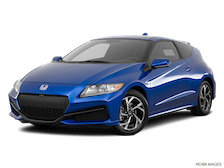 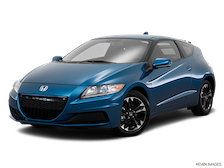 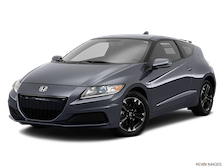 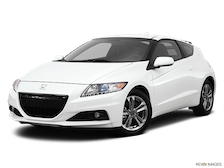 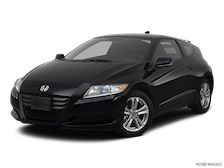 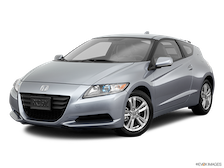 Honda introduced the CR-Z for the 2011 model year, and its time in the automaker’s lineup was relatively brief. The CR-Z was retired after the 2016 model year while still in its first generation. Fortunately, lots of affordable used models are available for those who want to take advantage of what this attractive hybrid has to offer.

This two-door Honda hatchback provides seating for two passengers. A six-speed manual transmission is standard, and a continuously variable transmission (CVT) is offered as optional equipment. With all models, power is sent to the front wheels.

The CR-Z’s exterior design puts the emphasis on style. Its broad-shouldered stance and bulging hood give it a muscular appearance. The car’s profile features an aggressively raked beltline and a sleek, fastback silhouette.

Modern styling cues prevail within the CR-Z’s cabin. The front row features a multi-sectional dash that impresses with its fluid, graceful appearance. There’s no rear seat available, and this makes the CR-Z a less practical choice than some of its rivals. On a more positive note, the car’s hatchback design allows it to deliver good utility.

Hybrids sometimes offer sluggish handling, but the CR-Z distinguishes itself with its relatively nimble performance. The small Honda hatchback is a good choice if you’re in the market for a green vehicle that offers pleasant, easygoing handling. Its steering is light and eager, and its small footprint aids maneuverability in cramped environments.

The CR-Z’s powertrain mates a 1.5-liter four-cylinder engine with an electric motor for a net output of up to 130 horsepower. All models come with a drive mode selector that allows you to customize the car’s performance by using Normal, Econ and Sport settings.

CR-Z hatchbacks offer a robust selection of standard and optional equipment. Sixteen-inch alloy wheels connect the car to the pavement. Within the cabin, base models come with interior amenities like full power accessories, a tilt-and-telescoping steering column and automatic climate control. The list of optional features includes heated side mirrors, xenon headlights, heated front seats and a navigation system.

Honda gave the CR-Z a refresh for the 2013 model year, and it brought in exterior upgrades and new standard features like Bluetooth connectivity and a rearview camera. The car was also updated in 2016. Its sheet metal was revised, and it added a 7-inch touchscreen and an optional blind-spot warning system.

The CR-Z is often cross-shopped against subcompact cars such as the Chevrolet Sonic, Kia Rio, Mini Cooper and Toyota Prius C. This talented hatchback distinguishes itself with its unique style and hybrid frugality.

CARFAX offers millions of used cars for sale nationwide. Every listing includes the vehicle history. The data below is updated daily, based on used car inventory for sale on CARFAX for the last five model years of this car. Find Used Honda CR-Z For Sale
Honda CR-Z Deals on CARFAX
Percentage of Honda CR-Z for sale on CARFAX that are Great, Good, and Fair Value deals. Values are determined by whether the selling price is above, below, or the same as the history-based CARFAX Value.
Great Value
(14)
Good Value
(14)
Fair Value
(27)
No Badge
(24)
VEHICLE HISTORY SUMMARY
The Vehicle History Summary represents the percentage of cars available for sale on CARFAX that are reported to have no accidents or damage, had 1-owner, been used as a personal or personal lease car, and/or have service history information.