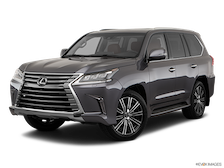 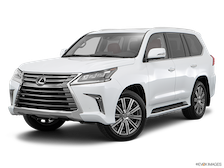 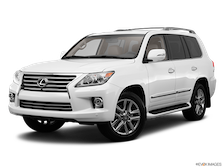 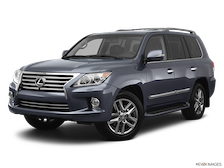 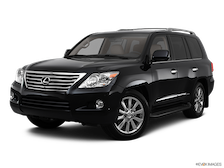 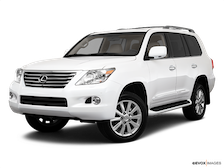 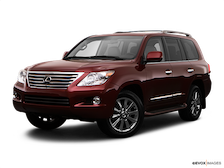 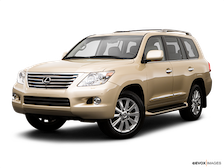 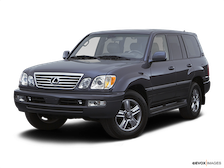 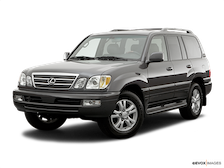 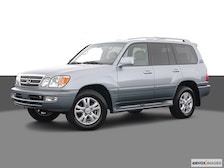 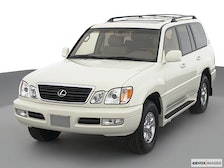 The Lexus LX is the brand’s largest SUV. Built on a body-on-frame architecture and equipped with a fair amount off-road equipment, this is a go anywhere vehicle with an impressive amount of luxury features to keep everyone comfortable.

The Lexus LX is the sister model to the Toyota Land Cruiser and the two models have a similar overall look. However, Lexus made some small changes to help the LX stand out. These include the brand’s spindle grille, LED headlights, running boards and a set of 20-inch wheels. Inside, the LX boasts a number of luxury appointments such as leather, heated seats, three-zone climate control, a nine-speaker Lexus audio system and the Lexus Enform infotainment system.

Power for the LX is a 5.7-liter V8 engine with 383 horsepower and 403 pound-feet of torque. This comes paired up with a six-speed automatic transmission and a full-time four-wheel drive system. The EPA rates the LX at 12/17 mpg city/highway, or 14 mpg combined. There’s also a suite of off-road systems that come standard on the LX including an adaptive suspension system with adjustable height, crawl control, hill-start assist control and turn assist.

Competitors to the Lexus LX include the Cadillac Escalade, Infiniti QX80, and Land Rover Range Rover.

The Lexus LX model first arrived on our shores back in 1995 as a 1996 model. Known as the LX 450, this first-generation model was basically the Toyota Land Cruiser with minor changes to exterior and interior pieces. Power came from a 4.5-liter six-cylinder engine with 215 horsepower and 275 pound-feet of torque, which is paired up to a four-speed automatic.

In 1998, Lexus unveiled the second-generation LX, which is called the LX 470. The numerical model name corresponds to engine, which happens to be a 4.7-liter V8 engine. Throughout this generation, power increased from 230 horsepower to 268 horsepower. The transmission was a four-speed automatic, followed by a five-speed automatic in a refresh. Lexus also made sure to differentiate the LX from the Land Cruiser by giving its own design treatment inside and out.

The 2008 model year saw Lexus introduce the current-generation LX. The overall design is a bit more rounded when compared with past-generation models. A new 5.7-liter V8 bumped power to 383 horsepower and 403 pound-feet of torque. This engine comes paired with a six-speed automatic transmission.

CARFAX offers millions of used cars for sale nationwide. Every listing includes the vehicle history. The data below is updated daily, based on used car inventory for sale on CARFAX for the last five model years of this car. Find Used Lexus LX For Sale
Lexus LX Deals on CARFAX
Percentage of Lexus LX for sale on CARFAX that are Great, Good, and Fair Value deals. Values are determined by whether the selling price is above, below, or the same as the history-based CARFAX Value.
Great Value
(23)
Good Value
(26)
Fair Value
(113)
No Badge
(95)
VEHICLE HISTORY SUMMARY
The Vehicle History Summary represents the percentage of cars available for sale on CARFAX that are reported to have no accidents or damage, had 1-owner, been used as a personal or personal lease car, and/or have service history information. 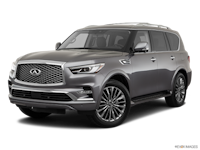 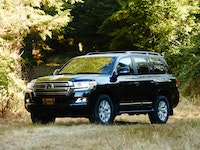