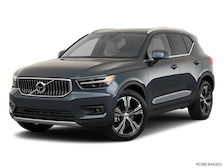 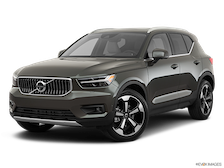 Many shoppers seeking small luxury crossover SUVs look for vehicles with a memorable design and upscale feature content. Both of these traits are present in the Volvo XC40, and it’s sleek and modern in every respect. The XC40 is the smallest SUV in Volvo’s lineup, and it made its debut with the 2019 model.

The XC40 is a subcompact SUV that serves as a relatively affordable gateway vehicle for shoppers with a fondness for the Volvo brand. It’s less expensive than other models in the lineup, and it’s also a good choice for those who want to experience Volvo’s singular take on luxury without breaking the bank.

When it was introduced in 2019, the XC40 was available with three trim levels:  Momentum, R-Design and the top-of-the-line Inscription. Even base Momentum models come with an extensive range of features. Every model is equipped with amenities such as LED headlights, leather upholstery and forward collision mitigation.

The XC40 provides handling that’s both smooth and athletic. It’s responsive enough to make your time behind the wheel entertaining, and it provides quick acceleration. Buyers have a couple of powertrain choices, which Volvo has named T4 and T5. Both feature a turbocharged four-cylinder engine mated to an eight-speed automatic transmission. T4 models are front-wheel drive and produce 187 horsepower. With T5 models, power is sent to all four wheels, and the engine generates 248 horsepower.

Volvo’s XC40 is notable for its distinctive style. Its modern exterior design is attractively angular and reflects the vehicle’s Scandinavian roots. A Swedish design motif is also at play within the cabin, where the look is sleek and contemporary.

Passengers enjoy a spacious environment within this Volvo crossover, and both front and rear seats provide good headroom and legroom. However, cargo space is mediocre. Other models in this segment provide more generous amounts of room for your groceries and Home Depot purchases.

Volvos are known for being pioneers in safety technology, and the XC40 provides a wealth of amenities in this area. All models come with a driver-drowsiness monitor that issues an alert if its sensors detect that you’re driving while distracted or fatigued. A lane-departure warning system is also standard.

A key strength of the XC40 is its broad assortment of up-to-date tech features. Mobile Wi-Fi, satellite radio and Bluetooth connectivity are all standard. Tech options include a wireless device charger and a Harman Kardon stereo.

The XC40 can be cross-shopped with luxury subcompact SUVs such as the BMW X1, Infiniti QX30, Mercedes-Benz GLA and Audi Q3. Its premium content and eye-catching sheet metal help make it one of the segment’s most desirable choices.

CARFAX offers millions of used cars for sale nationwide. Every listing includes the vehicle history. The data below is updated daily, based on used car inventory for sale on CARFAX for the last five model years of this car. Find Used Volvo XC40 For Sale
Volvo XC40 Deals on CARFAX
Percentage of Volvo XC40 for sale on CARFAX that are Great, Good, and Fair Value deals. Values are determined by whether the selling price is above, below, or the same as the history-based CARFAX Value.
Great Value
(153)
Good Value
(149)
Fair Value
(84)
No Badge
(62)
VEHICLE HISTORY SUMMARY
The Vehicle History Summary represents the percentage of cars available for sale on CARFAX that are reported to have no accidents or damage, had 1-owner, been used as a personal or personal lease car, and/or have service history information. 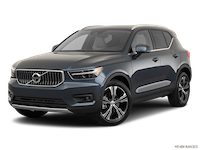